The Preacher gathered up his tender boy with a prophet’s name who loved to coax seeds out of the dark, damp earth into the spring light.

“I think the Lord is about to teach us a new kind of gardening son.  The kind where one’s heart is torn open and the tilling hurts.  The kind of planting deep from our own storehouse into someone else’s life –He’s going to teach us what benevolence really means.”

With that The Preacher and his Boy helped Old Smoke gather his miss-matched hand me downs for the down and outs into The Preacher’s truck and together they made their way to the city where there was more opportunity for grace.

“We got him settled into the motel for a week” The Preacher phoned, “took him to Community Action, and we got him some food, and a few more clothes.”

The Preacher paused in his telling as the weight of the questions:  “How much is too much, and when do you stop, and what if he is just using, and does it really matter?” Found their way into the vibrations of his speech.

“He looks good.  The room was clean, like he was afraid to even sleep on the bed when we picked him up!  I don’t think he can read very well.  I have some applications he could fill out, but he is going to need help.  I want him to make it….to really make it.  Maybe you and The Gardener can stop by and check on him?”

Family!  This was the sound of family on mission. Family being brought to a soul who didn’t know tending, or tilling or what it meant to be watered after a drought.   This was seed bed plowing, and kindness sowing and I could feel the expectation of life out of the ashes- the redeeming love of God blowing and warming the earth of our hearts.  Then the whisper comes from over the hedge wall, the cold north wind of the deceiver…”did God really say?  What if he doesn’t want help?  What if he doesn’t change?  You‘ve believed in him…what if he fails?  What if you cost the church all this money only for him to end up under the bridge?”

I sit on the bench outside of the café waiting for The Gardener and Old Smoke to arrive.  I wrestle with the thoughts of the flesh and the desires of my heart and I pray.  I pray to God to make it not matter what the deceiver whispers.  I pray to God to make this conviction of giving because God gave a reality in my life.  I pray for Old Smoke to want to be tended.  To want to live under the warmth of The Son, to want to believe that love doesn’t judge you based on your old cloak.  Love sees the golden heart.

The door swings open and a fantastic looking cowboy hat struts into the café.  The Gardener grins behind Old Smoke’s back.  “Evening Ma’am”, and there it was.  That sound that first broke my heart, the gentle voice that doesn’t match the weathered face, and that proud tilt of the hat that speaks of other days.  I choke back my tears and hug him.

We sit down and Old Smoke pours our coffee a gesture of hospitality that moves me into a memory of those ‘get up before the rooster mornings’ with my Dad.  Times when I got to ride down off the mountain with Dad instead of having to take the school bus.  We would leave early to stop for coffee at the local bakery.    I would climb up on those old wooden stools next to the soda fountain and rub the sleep from my eyes.  I can still hear the Bakery bell chime and smell the fresh rolls and taste the maple glaze on the Big Horn Dad would order to keep his coffee company.

I look at Old Smoke’s hands.  Rough, wrinkled and I remember the way Dad’s bear paw would cup his ‘mug-o-Joe’.  It was always three spoons of sugar and molasses dark. That was the way Daddy drank it.  He taught me to love that dark bean when he let me sneak my gingersnaps into his coffee when Momma wasn’t looking.  It didn’t matter how full I was, or how many cups of coffee I had that day, I always had room for one more when Daddy was pouring.  I looked down at the mound of paper work we needed to fill out just to get Old Smoke a roof, four walls and a toilet.

“You GOT to make it”.  I busted in on their quiet conversation.  My daughter heart beating, my mothering instincts in full force “No one is going to give you a rental reference, no one is going to stand up for you, I can’t have you living under a bridge! ” They both stared at me in their mid-sentence.  Then Old Smoke smiled and nodded.

“I knew the guy here in the City, the one who lived there under the bridge.  He was a friend of mine.  He died. ”

All of those rooster mornings, and molasses coffee moments crashed like breakers over my heart.  Not on my watch. Not with this blood in my veins is he going to live under a bridge. “I.D.  Do you have any form of I.D?  Post Office Box? Social Security Card?” Old smoke moved by my desperation began to fumble in his pocket-

“Here, I managed to save my wallet.”

I grabbed his creased, old leather wallet and began to rummage through the details of his life in frantic desperation.  That was when I felt the Gardener’s strong hand on mine, pressing my manic search for answers against the wooden café table.

“Stop.”  I felt the Gardener’s piercing gaze as I met his eyes.  The Gardener turned to Old Smoke with a tender voice.  “You ok with this?” Motioning to my raccoon rummaging fingers in what was left of his identity spread across the table in between his uneaten pie and my onion rings.  Okay with this?  I was fighting for his life and against all the whispers of the nay sayers what do you mean ok?

“If this makes you uncomfortable, or you don’t want us to go through your wallet you just say so, we don’t want you to feel violated in any way”.  Honor.  The Gardener was honoring Old Smoke’s dignity and I had allowed my fear and worry to cause me to plow in to the one personal possession he was able to save, without a thought to how it might make him feel.  I felt the heat of shame rise in my cheeks.

“Nah,” came his soft drawl.  “Who do I have but you guys….You and The Preacher, that’s all I got in the world.”

Tears hot and wet rolled down my face as I met Old Smoke’s gaze.  “You have to make it”  I said softly.  “I need you to make it.”

A rhythm of Preacher and Gardener in and out of that old motel must have had heads shaking at all the fuss over one old man.  But he was more than that.  He was a secret garden, a God in the flesh lesson of benevolence, a cross roads for a community learning to live the truth on the street and in their homes.  That Sunday envelopes began to emerge in the offering plate, marked special for Old Smoke.  People were owning their plot of ground and staking claim in the promise of God coming close to the broken and the humble and the giver.  He became family to more than just the tender Boy with the prophet’s name who loved to see green things grow.

The Gardener called me on his way home tonight.

“ I am going to stop by the motel and check on our man, haven’t been able to connect with him the last couple times I have stopped, just a little worried about him, I’ll call you when I am leaving the City”.

“Just leaving the City.” There was a smile in The Gardener’s voice.  “yeah, Old Smoke had to show me his new place.”

“He made it honey.  He did it.  He got himself into a place, and he is going to have money coming on the first and he has a plan.  It’s not much of a place, a small apartment but it is his.”

The Gardener’s voice was thick and trembling with the laugh only a soul vested in another soul who has come to life can hear.

“ The police officer who investigated the fire came to see him while I was there, he found a box of Old Smoke’s things that survived the blaze. It had his Mom and Dad’s wedding rings in them.”

I could feel the weight of my Dad’s hand pouring me a ‘cup -of -Joe’ on that old bakery stool.

“Where is he now?”  I stammered through my tears.

“Oh,” The Gardener laughed, “I had to take him downtown, to that old church on the street.  He was in a hurry and didn’t want to miss the meeting.”

“Yeah, that’s where he has been every night, they are having special revival services and he didn’t want to miss them.  He says he has met some good folks, and they are even going to give him some furniture for his new place.”

I exhaled the breath I had been holding and let the tears of gratitude flow for that church on the street who had found room in their hearts for a broken man.  That church on the street we had become where God has hands and feet in the dirt.  That place where homeless hearts and wandering gardens are tended.  Where the Old Smokes meet the Heavenly Fire and learn that what stands the flame of suffering becomes gold- Pure Gold. That place where we are enlarged as we give until it hurts without counting the measure of the gift.  That place of benevolent dwelling….where God is. 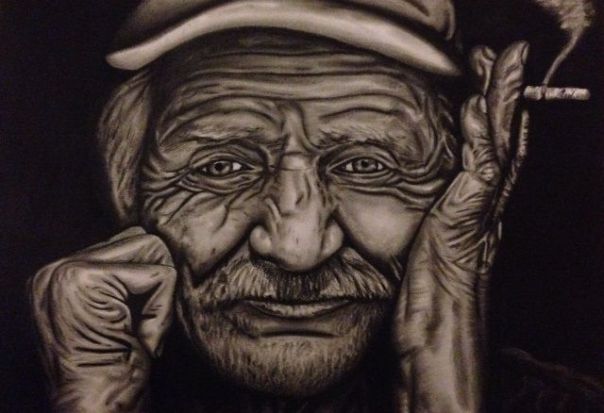