Jesus, knowing that the Father had given all things into his hands, and that he had come from God and was going back to God, rose from supper. He laid aside his outer garments, and taking a towel, tied it around his waist.  Then he poured water into a basin and began to wash the disciples’ feet and to wipe them with the towel that was wrapped around him. John 13:3-5 ESV

Throughout this journey I have been struck with the posture our Lord takes as he leads his beloved disciples.  He is confident, present, and alert to the slightest whisper of the Father’s voice.  Here now, on the eve of his Passion, when he could have been consumed by a thousand other things, he has love on his mind.

Spurgeon said it best when describing this night:  “The Father had given all things into His hands.” You might suppose that He would stand up, in a very dignified manner, and put on a purple robe and a golden belt, but, instead of that, He rose from the supper table, laid aside His garments, and took a towel, and girded Himself. He knew that He had come forth from God and that He was going back to God—and He performed this action on the way home to His Father. O dear Brothers and Sisters, if Christ thus stooped, how humble ought we to be! No office should be counted too lowly, no work for His servants should seem to be too humiliating, since Jesus “took a towel and girded Himself.”

The saying goes that in the light of a man’s departure, you can tell what really ruled him.  Here, knowing that he had come from God was returning to God, and that all things were in his hands Jesus humbles himself and in his own extravagant outpouring of love washes his beloved friends feet.  No fear, no remorseful regrets, no frantic last minute lessons, just love and simple devotion.

He is about to face the greatest agony of his soul, where all will betray him and he will be left alone to face his accusers.  We find no aloofness, no separation of his heart from theirs.  Oh how he loved.  How he took such care with the souls entrusted to him. How he still cares!  I gaze at the passage and am amazed at how he not only washed but he wiped.  He finished the work.  Jesus puts Himself in the place of a slave and He performs a slave’s duty tenderly wiping the water from their feet, not leaving the work undone.

I stand at the basin Lord.  Wash me, and I will be clean.  Let me have a portion in you. 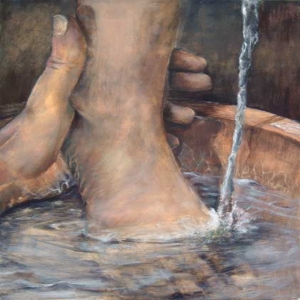