I used to be very afraid of the dark. Leaping from the bedroom doorway to my bed, sure there were monsters waiting to grab my ankles from under the darkness.  As I grew older it became a point of pride and a sign of strength to be the one of my friends in our night time capture the can game to venture into the dark, and defend the mound alone. Deep down, I was still terrified, and would tremble at the sounds and imagine all kinds of evil waiting to pounce upon me.  I was never comfortable with the night, until I realized during one of my readings at youth group, that God clothes himself in darkness, and Moses braved the dark, to see the glory of God.  I wanted to desperately see God as a teenager, and so I staged my own version of the Cherokee Indian Rite of Passage hoping that God would meet me in the way he had met Moses on Sinai.

In the legend, the young Cherokee boy is taken outside the camp, blind folded and led deep into the woods where he is placed upon a stump to sit all night. He is not to cry out, or to move but is to brave the sounds and creatures of the night. In the morning when the rays of dawn break through the darkness, if he has bravely stayed his watch without fear or crying out for help, he is considered a man.  When the blind fold is taken off, he is astonished to see his father was seated on the stump next to him, keeping watch over his son all night, and protecting him from harm.

After reading this story, I decided to brave the night, and test my Heavenly Father’s care for me, with a few modifications.  I only made it to the back side of the pasture, and vowed to keep my eyes closed instead of using a blindfold.  I had waited until the house was very quiet, crept downstairs and out the back door.  There was no moon that night, and the stars offered little guidance as  I made it to the secret spot and sat in the darkness trying to hear something other than my pounding heart.  Once my heart stopped racing I was fascinated by the various sounds and rhythms the night offered.  It had it’s own song and cadence.  I was amazed at what could be heard in the night. Pictures of sounds became vivid in my mind, and a landscape that was so different from what my eyes had memorized during the day emerged.  I was delighted to discover I could make out familiar movements of the livestock, could gauge distance from the way their hooves moved in the dirt, and even the munching of grass hoppers on the timothy stalks next to me was discernible.  I had discovered a new world and it was strangely comforting.  They say that when we lose one of our primary senses, the others senses become heightened.  That night I found I could “see” with my ears.

My thoughts turn to our devotional reading from Mark 10 and the familiar story of blind Bartimaeus.  Is that how he had survived all these years?  He had learned to listen to footsteps, and discern hearts by the way they walked?  Whether the sandal-ed  feet  brought charity or a swift kick to the side?  Which feet to lean towards, which ones to shy from.  We find Jesus thronged with a crowd as he makes his way to the road outside the city, there must have been something about the movement of the feet that caused Baritmaeus to beg answers rather than coins. Who is approaching?  Why the commotion?  What is happening?

Bartimaeus had likely heard many stories from those who passed his begging spot on the road from Jericho.  How this Nazarene was unlike any man anyone had ever seen. He may have even wondered, “can anything good come from Nazareth?” That is not the city of the prophets, or the great ones. Yet the stories must have come jingling like alms to his heart. A deaf mute cured, a paralytic healed, lepers cleansed and a man blind from birth now sees!  Rumors of the Messiah must have swirled around him awakening hope that He would come to his town.

Something must have taken hold in his heart from the tales of the wayfarers  because Bartimaeus cries out to Jesus with the phrase reserved for the Messiah:  “Son of David” and pulls on the covenant promise of mercy…”have mercy on me!”  He will not be silenced, until the Son of God stands still and asks the dangerous question:  What do you want?  In that moment Bartimaeus’s faith through hearing brings him sight.  ” My Master, that I might see”

Isa 42:6-7  I, Jehovah, have called thee in righteousness, and will hold thy hand, and will keep thee, and give thee for a covenant of the people, for a light of the Gentiles;  to open the blind eyes, to bring out the prisoners from the dungeon, and them that sit in darkness out of the prison-house.

In one moment, Bartimaeus went from the prison of darkness, into the glorious light of Messiah’s love and fellowship.  His mantel of his old life left lying on the ground, we find him accompanying Messiah on the road.  He became a disciple of the Way, a joyful testament to the glory of God breaking in to the darkness of sin and despair. Though he was blind in the natural, he could see the reality of the mission of Christ with his spirit, and he believed! Nothing would silence his cry for mercy.  No matter how many times we was told to shut up, and pushed aside he knew the wretched state of his existence and the Messiah was his only hope. His desperation moves me to consider my own blindness.

How badly do I desire mercy?  How blind am I to the reality of the condition of my heart?  Do I know that I am but a beggar on the side of the road, without the eyes of my understanding being enlightened, that I might see the hope of  the one who calls me to come to Him. ( Ephesian 1:18).  Lord, I ask with the cry of Bartimaeus, have mercy on me…Master, open my eyes, that I may see. 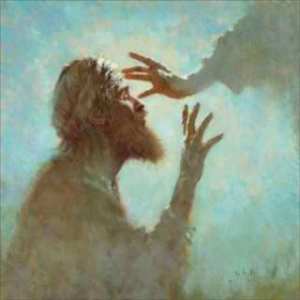